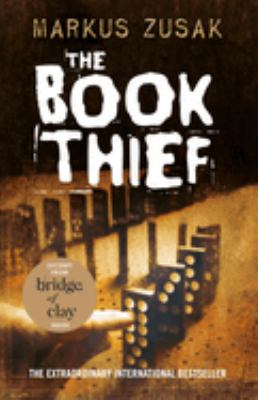 The Book Thief by Markus Zusak is a coming-of-age story about a girl named Liesel Meminger. The story focuses on a  family struggling through WWII Germany and the power of words to unite people. Liesel, having just lost her brother, finds a small book near his grave and finds comfort in its pages. There’s one problem- she can’t read. She struggles to learn with the help of her new adoptive father, Hans Hubermann. Before long, as she tries to adapt to her new life and family, Liesel begins to steal books from wherever she can find them. At a time when the Nazis burned books to eliminate resistance, Liesel learns the power of knowledge and empathy for others through protecting their stories.

This story is unlike any other historical fiction I have read. It is witty and funny without sacrificing the tense atmosphere that was present in Nazi Germany. It is not really a war story, nor is it depressing. Zusak chooses to focus on Liesel’s love of reading and her choice to disobey societal norms as a way of illustrating the sacrifices the ordinary people of Germany had to make. He focuses on the importance of love and trust during a time when trusting the wrong person could result in death. The story highlights moral resilience and childhood innocence.

Zusak’s choice of having Death as the narrator is unique and adds a new dimension of sympathy. The story portrays the brutality of human suffering while contrasting it with the beauty of Liesel’s resistance to conformity and the playfulness of her childhood. She is a character you cannot help but root for. Readers of Markus Zusak will recognize his consistent use of intense emotional connections between the characters, which is transfixing and all-encompassing ( My favorite being that between Liesel and Hans Hubermann). The story is eye-opening and puts you in the shoes of a small girl whose situation most 21st-century readers will never truly be able to understand. But this book is a glimpse into the struggles of a war-torn people, and Zusak proves through Liesel that empathy and love can overcome all evil.

Looking for Alaska by John Green is a New York Times bestseller and Michael Printz Award-winning novel about the life of teenagers who attend Culver Creek boarding school in Alabama. The story follows Miles Halter as he tries to fit into his new lifestyle. At Culver Creek, Miles begins making friends and eventually meets Alaska Young, whom he instantaneously falls in love with. Throughout the course of the novel, Miles learns more about Alaska’s past, and realizes she may be more of a ticking time bomb than he suspected. After a night gone wrong, Miles and his friends team up to search for any sign that Alaska is the girl they always though she was.

Looking for Alaska is a great novel for any teenager who enjoys comedic writing with a hint of mystery and a lot of romance.

Title: Most Dangerous: Daniel Ellsberg and the Secret History of the Vietnam War

Before Edward Snowden and Julian Assange, there was Daniel Ellsberg.

Ellsberg was a Harvard grad, ex-Marine, and staunch cold warrior. He spent seven years as a Washington insider at think tanks and the Pentagon, analyzing the Vietnam War.

Most Dangerous by Steve Sheinkin tells how Ellsberg grew to realize that the U.S. presence in Vietnam was built on a breath-taking series of lies and omissions; how he secretly and illegally copied the Pentagon Papers and gave them to the media; and how this eventually led to Watergate, Richard Nixon’s resignation, and the end of the war.

It’s an action-packed page-turner, and it’s all real!

Title: Where Things Come Back

This book got glowing reviews, but I didn’t buy it when it first came out because I didn’t think a first novel about a kid in small-town Arkansas had much to offer my patrons up here in Connecticut. Then it went and won some serious awards and I had to pay attention – and I’m so, so glad I did.

Where Things Come Back is difficult to describe but easy to read. Here’s the first sentence: “I was seventeen years old when I saw my first dead body.” Intriguing, right? But, that’s still not as eventful as what happens to Cullen Witter over the course of the summer before his senior year of high school. The writing is simple, but there are multiple plots and points of view, and it all adds up to a deceptively sophisticated novel.

Nineteen-year-old Sam is stuck in a dead-end job flipping burgers and hanging out watching old movies with his slacker friends in Seattle. A late-night prank brings some uncomfortable attention from Douglas, a powerful and malicious necromancer, and then Sam and his friends are violently attacked. Turns out Sam has the makings of an equally powerful necromancer, which his mother has been suppressing for years in order to protect him.  It’s too late to hide, though, and Douglas has plans for Sam that alternate between slavery and death. Good thing Seattle is full of weird creatures, because Sam needs all the supernatural help he can get to unleash his powers and escape a very unpleasant, very short future.

This is a debut novel, but you’d never know it. The book is well-written, fast-paced, and switches back and forth from seriously scary to laugh-out-loud  funny at the drop of a hat. A great book for older teens.