As a shallow and superficial person, I had noticed and disregarded this book on many occasions because of the not-so-exciting cover. Sadly, I am all about judging books by their covers. It often comes back to haunt me, but have I learned from my many mistakes? No. Anyhow, I saw yet another rave review of Misfit online, and decided I really should give it a go – lucky me!

Hiding underneath this cover is an amazing story. Jael is the daughter of a demon and an ex-priest – although she never knew her mother, who died when she was a baby. Because she’s a half-breed, demons consider her an abomination and want to destroy her, so her father has kept the two of them on the run and under the radar for years.  As Jael turns 16, her powers begin to manifest, and the world may never be the same.

Between the mythology and the action, Misfit should easily appeal to older fans of the Percy Jackson books. The story wraps up nicely, but the world-building and backstory are so rich that there’s plenty of room for a sequel (or two?). It doesn’t look as though Jon Skovron has any plans to continue the story in a full-length book (there are a couple short stories out there), but we can hope….

Title: The Future of Us 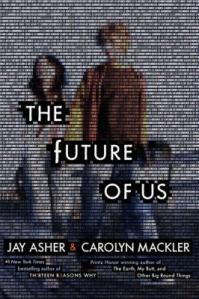 It’s 1996 and Emma has just gotten a computer. When she dials into the Internet, she finds a funny website called Facebook that has all sorts of  information about her life – 15 years in the future!

In alternating chapters, Emma and her neighbor/best friend Josh try to figure out how the different choices they make right now affect the outcome of their lives in the future.

This is thoughtful and often funny, although I have to say that it didn’t leave a huge impression on me. The nineties nostalgia is a fun bonus for someone (like me) who was alive then. I’ve categorized it as both realistic and science fiction, which seems pretty contradictory, but I can’t figure out how else to describe it.