Title: Can You Keep a Secret? 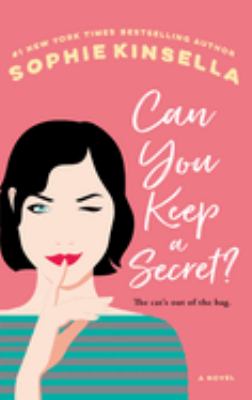 Can You Keep a Secret? by Sophie Kinsella is both uplifting and hilarious. Kinsella is an author who is able to create light-hearted stories without making them predictable and cliche. While she has written many fabulous books, including Twenties Girl and Remember Me?, Can You keep a Secret stands out as having very relatable situations and characters, which makes them even more laugh-worthy. The story is about a girl named Emma, a terrified flyer on a bumpy plane ride. She is a flawed bundle of nerves, but that is exactly what makes her understandable and realistic to the reader. On her trip, she gets so nervous that she just starts talking…and talking…and talking…to the random stranger sitting next to her. She tells him literally everything, such as the fact that she waters her irritating co-worker’s plant with orange juice just to annoy her. Once the flight lands, Emma is terribly embarrassed, but at least knows that she will never have to see this man again. Think again! It turns out that the man is the CEO of Emma’s company! This man now knows EVERYTHING about Emma. and will see her every day. Just reading it makes me cringe!

I don’t laugh with books very often, but Sophie Kinsella is so funny, and all of her books are just as laughable and irresistible. Can You Keep a Secret? is a hilarious and embarrassing story that brings tears to your eyes. It is realistic, but not at all boring. It is the kind of story for a cozy day in bed because of its fast-paced, cause-and-effect-style plot. The best thing about Kinsella’s books is that you know exactly what you are getting: witty, sarcastic humor and lovable main characters.  After reading this book, you can only hope that something like this never happens to you!

The mystery of the Ninth Legion of the Roman army has inspired several novels and a couple of films, too (Centurion, The Eagle). Stationed in Britain in the second century AD, the legion – more than 3,000 strong – marched north into Scotland and completely vanished, presumably wiped out by the Picts whom they were sent to defeat.  Some scholars believe that really was their fate; others believe the legion left Britain for other parts of the Roman Empire.  Regardless, it’s fun to speculate about what happened.

In The Shadowy Horses, archeologist Verity Grey has been hired onto a dig in Scotland. Her boss has spent his life chasing after the Ninth, and the academic community regards him as anything from an eccentric to a complete laughingstock. This time, though, he’s sure he’s found their remains. Why? Because a young local boy has “seen” a Roman soldier walking in the fields.

When I was a teen, I absolutely adored romantic suspense novels by Mary Stewart, Daphne DuMaurier, and Barbara Michaels. I’m happy to report that The Shadowy Horses provided the same wonderful reading experience.  Verity is a witty, capable heroine, and there’s no wishy-washy hand-wringing or angsting going on here. The setting is vividly rendered, and of course, there’s the delicious romantic tension.

The Shadowy Horses was written 15 years ago (how did I miss it back then?), but it is being rereleased along with several other romantic suspense novels by Susanna Kearsley. I’ll definitely be looking for the others.