Title: The Night She Disappeared 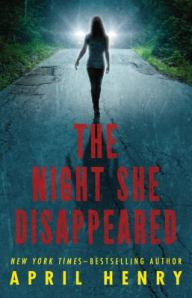 Gabie is a good girl. She’s quiet, gets excellent grades, drives a cute little Mini Cooper, and works at a pizza place mostly to get out of her big, empty house. When bright, bubbly Kayla asks to switch shifts one night, Gabie agrees. Then Kayla disappears, and Gabie finds out that the guy who called in the pizza delivery asked for the girl in the Mini Cooper. Was Gabie actually the intended victim? Is Kayla already dead?

Gabie becomes obsessed with Kayla’s disappearance and enlists the help of Drew, the co-worker who took the phone order that sent Kayla out that night. Gabie’s convinced that Kayla is still alive, but that time is running out.

Different characters take turns narrating the story, so we get to know what’s going on with Gabie, Drew, Kayla, and even the kidnapper. The chapters are also connected by newspaper clippings, phone transcripts, and other ephemera, which is a neat touch. The one thing that threw me off a bit was the little hints of psychic connection between Gabie and Kayla.  It’s a bit too woo-woo for a straight mystery, but not enough to qualify as a seriously paranormal story. That’s a minor quibble, though, and by and large I really enjoyed this short, intense book.